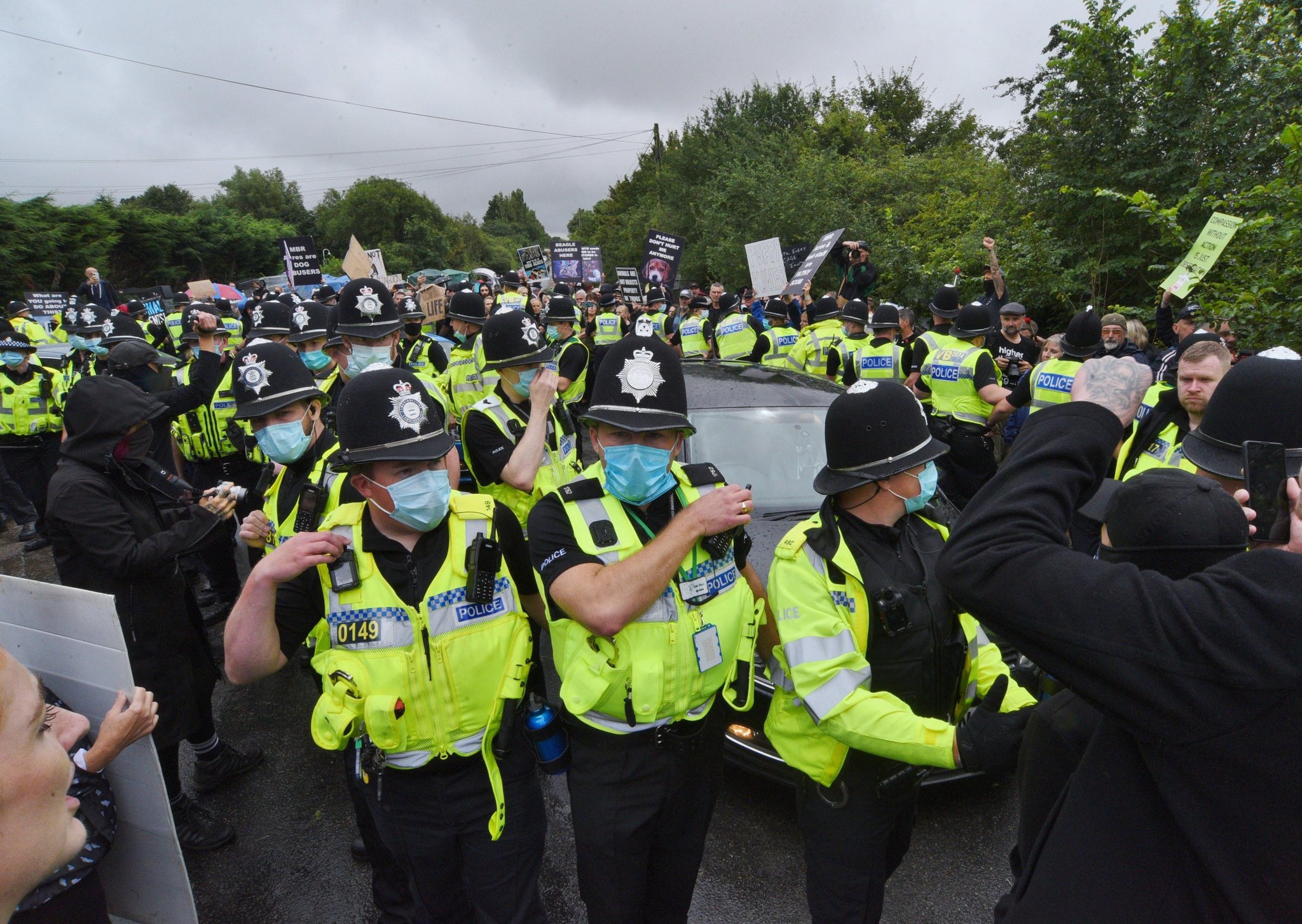 On Sunday August 1, hundreds of ‘Free the MBR Beagles’ protesters gathered for what has been called a ‘Memorial Vigil’ for the puppies raised by Marshall BioRescources (MBR) after leaving their MBR Acres site in Wyton, the outskirts of Huntingdon.

A minute of silence was observed before protesters held rallies and made their feelings known to workers inside the site trying to leave.

Police officers from all over Cambridgeshire have been drafted to help staff inside get out. Two protesters were arrested at the scene.

A Cambridgeshire Police spokesperson said: â€œThe protest on Sunday August 1 at MBR Acres Ltd in Sawtry, Huntingdon involved around 150 protesters who were aimed at preventing facility staff from leaving the site.

â€œOfficers attended and provided a proportionate police response, balancing the needs and rights of protesters with those affected by the protests.

â€œTwo people were arrested at the scene. A 37-year-old man from Huntingdon has been arrested on suspicion of threatening behavior, intimidation and harassment.

â€œHe was released on bail until August 29.

â€œA 39-year-old woman from Huntingdon has been arrested for obstructing the freeway, but has been released and will not be subject to further action. ”

One of the leaders of the Free the MBR Beagles movement, Mel Brown, praised the passion of the protesters.

He added: â€œThe protest was very passionate and it is an issue that annoys a lot of people.

â€œWe’ve made it clear from the start that we want to keep these beagles safe and are ready to do it and we clearly have a broad base of support.

â€œWe want to shut down the cruel dog research industry and more and more scientists are joining us; disputing the effectiveness of dogs for testing the effects of new drugs on humans.

â€œThis is something that in the 21st century just has to stop. Beagles are chosen for their small size and placid nature.

â€œThere has been a breeding ground for over five decades and because of this hundreds of thousands of dogs have suffered, which is why we held a Memorial Day and a Minute of Silence.

â€œIt was a successful day and we are getting stronger. We are determined to stop this type of research and urge MBR to do the right thing. ”

MBR says they “want to be the primary source of animal models for preclinical research and the development of human drugs, vaccines and other therapies.”

The site is used to breed beagles until they are old enough that they can be returned for use in medical research and has sparked a number of protests over the past year.

Protests have grown over the past month, however, since Stop Huntingdon Animal Cruelty posted footage from inside the site showing the dogs in crates, as well as footage where the dogs could be heard crying.

As a result, the â€œCamp Beagleâ€ was installed outside the site gates four weeks ago and there has been a permanent presence on the site ever since.

Protesters say Tuesday (August 3) marks one month to the day since the last dog left the site and their presence saved the lives of around 250 puppies from a cruel and unnecessary death in a toxicology lab.