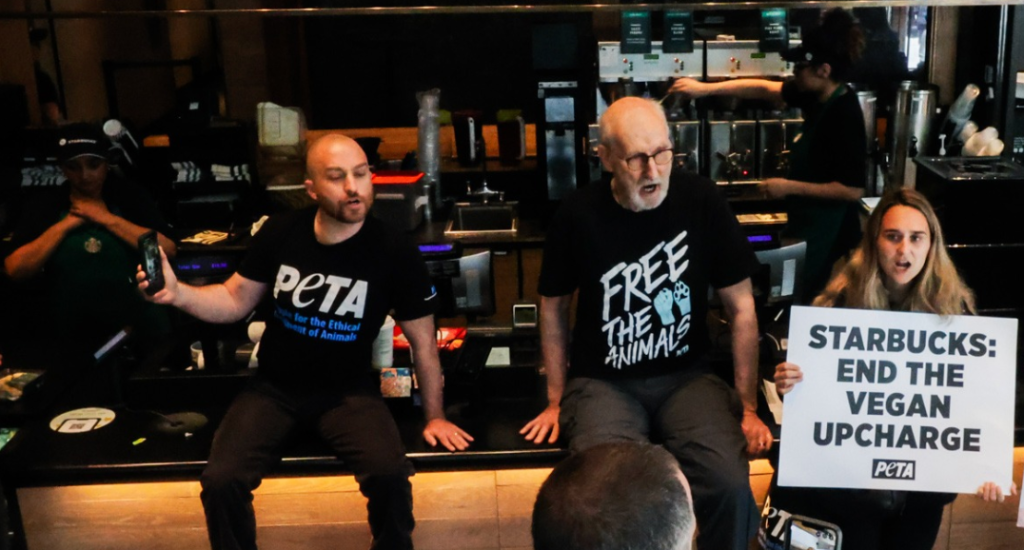 James Cromwell, nominated for the Academy Award for Best Supporting Actor in 1995 for his role in baby, took the animal rights banner today during a protest at a New York-area Starbucks. In a PETA action against the billing chain for vegans’ favorite non-dairy milk substitutes, Cromwell and another man huddled at the store’s counter while other activists held signs protesting the policy.

“Non-dairy products all over the world… France, they give these things away. There is no charge for this. There are exorbitant fees here,” Cromwell said as he sat with his hand glued to the store’s checkout counter. “Why, when it is so important now to address climate change and understand the violence against animals to continue to produce the dairy products that are served here? There is no reason for this except greed.

Police were quickly called and reportedly told the protesters to leave, which they did after around 30 minutes. It’s unclear how the actor took his hand off the counter, but he then showed the camera his palm, which still appeared to have the substance on it.

he later reminded that on the project, he “worked with a lot of animals and animal trainers. I cared about their well-being and then, of course, you were having lunch and it was all there in front of you, and I thought, “I should go all the way,” so to speak. So I made this decision and I kept it during the shooting. When I came back, I got involved with PETA.

Cromwell has been arrested multiple times in PETA protests, including a 2017 action targeting SeaWorld’s treatment of killer whales.

He’s not the only animal rights activist to make a statement with glue lately.

Last month, a woman was protesting an egg farm owned by longtime Minnesota Timberwolves governor Glen Taylor try to glue himself to the field during a live broadcast of an NBA Tournament qualifying game between the Timberwolves and the LA Clippers.

After Minnesota won that game and moved on to a playoff series against the Memphis Grizzlies, another woman protested the same farm in chain to the basket on live television.