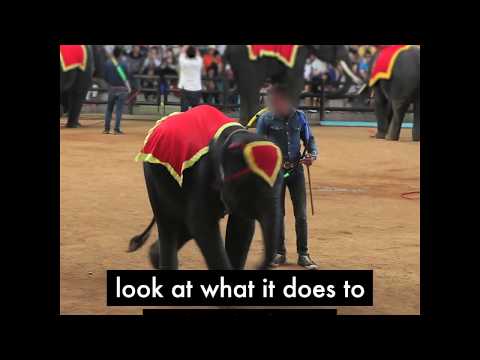 Unpublished images released by the charity shows parts of the cruel training process, sometimes referred to as ‘crushing’, that young elephants endure to make them submissive enough to interact with people.

In the video, young elephants are forcibly taken from their mothers, tied to wooden structures for days, forced to walk in chains and beaten.

World Animal Protection calls on the travel industry to rebuild better before tourism resumes in Thailand and other vacation destinations. And to commit to ending the exploitation of elephants and other wildlife for tourist entertainment.

“This is the perfect opportunity for the travel industry to sever its ties to the wildlife trade and rebuild itself responsibly,” says Melissa Matlow of World Animal Protection Canada. â€œElephants are still poached in the wild to meet the demand of tourists to ride them. Whether elephants are captured in the wild or bred in captivity, all elephants used for walks are cruelly trained and this must stop now to end suffering animals and protect elephants in the wild. “

There are around 2,800 captive elephants in camps across Thailand, who have undergone this cruel training. The disturbing images were captured to document the most common techniques used to break elephant morale. This includes the use of a hook – a metal tool used to hammer in sensitive areas, chains to hold them back, and frequent exposure to stressful situations. This horrific treatment of elephants is to make them submissive enough to be used for spectacle, horseback riding, swimming, and other tourist interactions. Tourism drives demand for elephant experiences, and trainers are compelled to deploy these methods.

With the industry shutting down during the pandemic, at least 85 elephant camps in Thailand were forced to close, laying off more than 5,000 employees. The remaining camps still struggle to care for their elephants. World Animal Protection provided essential funds to 12 ethical and elephant-friendly camps across Asia to help them get through this difficult time.

As a long-term, sustainable solution, the charity advocates for a ban on elephant breeding for tourist entertainment to ensure that future generations do not experience this trauma. Travel agencies also hold considerable power to turn their backs on unethical practices and may instead opt to support elephant-friendly camps, where tourists see elephants from a safe distance.

For most elephants, it is not possible to be released into the wild, which is why an elephant-friendly camp is their best option. These camps still provide jobs for local people such as elephant keepers, known as mahouts. Elephants have the freedom to behave naturally, rather than being used for strenuous, chained walks.

Over 250 travel agencies have pledged not to sell elephant rides and shows. This includes Intrepid, G Adventures, World Expeditions and the Travel Corporation who have adopted progressive animal welfare policies and are working with World Animal Protection to encourage the travel industry to change.

World Animal Protection calls on other Canadian travel agencies to join in and take responsibility to end the exploitation of elephants and other wildlife forever.

The association also encourages everyone to support a comprehensive global ban on the wildlife trade, which inflicts suffering on millions of animals every day.

From our offices around the world, including, Brazil, Kenya, the United States and Canada, we move the world to protect animals. Last year, we gave more than 3 billion animals a better life through our campaigns focused on Animals in the Wild, Animals in Disaster, Animals in Communities and Animals in Agriculture . For more information visit https://www.worldanimalprotection.ca

For more information: Notes to Editors: For an interview with a spokesperson or for more b-roll images contact Nina Devries – [emailÂ protected] or 437-970-6565

The advantages of title loans | Our partners

Why car title loans have become a popular choice